Dick Schafer was a walking encyclopedia on water issues and a staunch advocate for growers through his entire career up until his death. I first met Mr. Schafer following a water meeting more than ten years ago.  I was impressed with his knowledge, passion for agriculture, and desire to continue working well into his 80’s.

I later received the honor of working alongside Mr. Schafer while we served on the San Joaquin Valley Water Quality Coalition together.  We would occasionally argue on approaches to water issues and more frequently over who pays what share.  You always knew he would fight you over every nickel and knew it was more about the fight than the nickel itself.

While Mr. Schafer was great at standing his ground, he also knew how to separate business from personal. Whether you were standing side by side with him or whether you were the brunt of his criticism, he had a way about him that endeared him to everyone and earned him much respect.

I am incredibly grateful for the opportunity to know and work with Mr. Schafer.  He left a lasting legacy within the water community throughout the State, and citrus growers in the region have significantly benefitted from the advocacy and vision of Richard L. Schafer.  Schafer dam, which was renamed for him, will carry on as a lasting legacy of a great man.

We send our many thanks for his service to this industry.  He will be missed! Our thoughts and prayers are with his wife Mary, his daughters Sue and Shelley. 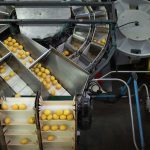