Along with several ag organizations, California Citrus Mutual was successful in a legal challenge against the California Fish and Game Commission. The Commission voted to approve listing four bumblebees species as a candidate for protection under the California Endangered Species Act (CESA). Under a candidate listing, the species have the full protection of CESA until a final determination is made.

The ag groups challenged the listing as insects are not a category for protection under CESA. Environmental groups had petitioned that bumblebees are invertebrates, and invertebrates are mentioned in the fish determination.

Ultimately the judge sided with the plaintiff’s arguments striking the candidate listing, stating that the state Legislature did not intend the California ESA to protect invertebrates categorically. 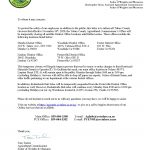